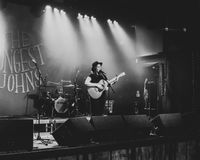 Abi is excited to open the show for her friends "New Purple Celebration" at Nottingham's Rescue Rooms. She sang backing vocals for the band on their 2017 tour and will now be opening the show in her hometown for them. This will likely sell out as there are only a handful of tickets left.

Abi will be playing a solo acoustic show of 2 sets from 9pm, bringing her blend of alt-folk/ Americana/ roots-rock to the Sir John Borlase Warren pub at this solo acoustic gig. Abi will be playing brand new songs from her forthcoming new album 'No More Chasing,' with a handful of choice covers by the artists who inspired her sound (The Staves, First Aid Kit, Fleet Foxes, KT Tunstall, Joni Mitchell, Fleetwood Mac) & favourites from her previous three studio albums. "Impactful, gritty and above all, brimming with conviction. Abi's stripped back, stomp and holler sound instantly took us to KT Tunstall." RIGHT CHORD MUSIC 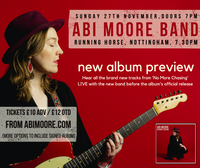 Join Abi for a one-night-only preview of her forthcoming new album "No More Chasing," before its official release. Playing the entire album live and loud with her new band for the first time, come watch the show and meet Abi & the band in the intimate and buzzing atmosphere of Nottingham's famous Running Horse.

It's been 8 years since her last, critically-acclaimed album "Amoeba & Stone" and she's back with a brand new sound. “Impactful, gritty, and above all, brimming with conviction. Abi's stripped back, stomp and holler sound instantly took us to KT Tunstall, while her styling and rootsy, distorted Americana guitar twangs have a delicious White Stripes flavour." RIGHT CHORD MUSIC

Listen to the new singles from the album at https://linktr.ee/thisisabimoore

Abi will be signing CDs after the show. The album will be available as a CD (£10) and Digital Download (£7) at the show, or get a discounted copy by combining your show ticket and album order in advance:

Doors Open 7pm. Over 14s only. Under 18s must be accompanied by a parent.